VGP - Pham Minh Chinh on Monday delivered his inaugural remarks at the National Assembly after the legislative body unanimously elected him as Prime Minister of the Socialist Republic of Viet Nam for the 2021-2026 tenure.

Incumbent  and former leaders of the Party, the State and the Vietnamese Fatherland Front,

First of all, I would like to sincerely thank the National Assembly for placing your trust and electing me as the Prime Minister of the 15th-tenure National Assembly. I am aware that this is a great honor; at the same time, it is also my heavy responsibility entrusted to me by the Party, the State, compatriots, and voters nationwide.

In this sacred moment, please allow me to express my endless gratitude towards our venerable President Ho Chi Minh - the Hero of National Liberation, and a Great Man of Culture. On this occasion, I would also like to show gratitude towards my predecessors; the veterans of the Revolution; the Heroic Vietnamese Mothers, the heroic martyrs; war invalids; compatriots, comrades and soldiers nationwide together with the overseas Vietnamese community ... all of whom have made invaluable contributions to the cause of Fatherland construction and defense over the years, so that our country could have its current level of fortune, power, international standing and prestige.

I would like to extend my sincere thanks to the Party’s Central Committee, the Politburo, the Secretariat, comrade General Secretary Nguyen Phu Trong as well as Party and State leaders in general for their judicious and rigorous leadership. Likewise, the help and support provided by the former Prime Minister and former Government members, by the National Assembly delegates, by our compatriots and soldiers nationwide, by our overseas compatriots and by our international friends and organizations... to the Government and the Prime Minister are all deeply appreciated.

The Government of the 15th-tenure National Assembly shall inherit and bring into play the valuable experience together with the lessons learned over the years from previous Governments. We shall strive to build governmental organs that are united, integrous and disciplined; lean, effective and efficient; dynamic and innovative at all levels - organs that uphold the legitimate rights, interests and wishes of the people.  The motto of placing National interest first, “taking the people as the roots” shall be taken to heart. The viewpoints and guiding ideas; the 6 key tasks, 3 strategic breakthroughs, 12 tasks and solutions laid out in the 13th Party Congress’ Resolution together with National Assembly Resolution shall be proactively, synchronously and effectively actualized. Among them, special attention shall be paid to the following key tasks:

In the context of complex evolution of the COVID-19 pandemic, the Party and the State empathize with the material and mental hardships that the People are facing as lockdown and social distancing measures are taken. With “fighting the pandemic like an enemy” as the guiding thought, and protecting the people’s health and safety as the ultimate goal, the most urgent task of the Government and the Prime Minister now is to concentrate resources and intellect to deploy flexible and creative solutions - especially when it comes to vaccination strategies; bring into play the power of the entire political system and the spirit of great national solidarity; appeal for the people’s unity and joint efforts, raise the level of compliance with anti-epidemic measures and evoke the People’s “love others as you would love yourself” spirit so that the pandemic can be successfully combated while also stepping up socio-economic development in a fast and sustainable manner; continue to build, recommend mechanism and policies to support the people and enterprises in current difficult conditions.

Further build a strong and clean Party, raise the leadership capacity and combativeness of Party organizations and Party members in governmental organs at all levels, contributing to building a ruled-of-law socialist state of the People, by the People, for the People. Draw up specific solutions to vigorously reform the national public administration system, raise the level of discipline in the State management; create a favorable environment to encourage the people and enterprises to contribute to the development of the Vietnamese socialist Fatherland. Appropriately step up delegation and decentralization, combining the individualization of responsibilities with raising the capabilities of subordinate organs; at the same time enhance coordination, supervision and control of powers. Bring into play the activeness, dynamism and creativity of authorities at all levels; formulate mechanisms to encourage and protect cadres that are willing to renovate, and act for the common good. Devise specific plans and solutions to resolutely, persistently prevent and struggle against corruption, waste, bureaucratism, acts of harassing or being distant to the people, expressions of arrogance and other deviations from the Party’s goals and ideas.

Further refine the socialist oriented market economy institutions, with immediate focus on identifying and removing “barriers” and “bottlenecks” concerning institutions, mechanisms and policies that cause economic stagnation. Restructure the economy in conjunction with renovating the growth model; raise the economy’s adaptability and resilience in all conditions on the basis of bringing into play the spirit of self-reliance, with the internal strength being the fundamental and decisive factor, while taking advantage of external resources is important and necessary; maintain macroeconomic stability, economic, financial and monetary security. Mobilize, manage and effectively put to use all resources for developmental investments; promote public - private partnerships, utilize State resources to guide and activate non-State resources, on the basis of ensuring the harmony of interests, and the sharing of risks between the State, the People and enterprises. Further improve the business environment, ensuring that it is transparent and fair for different economic components, economic entities and the people. Focus on reviewing credit organizations that perform poorly as well as projects that make prolonged losses and work out plans to promptly and efficiently handle them; actively tackle the shortcomings and raise the quality and efficiency of public investments.

Focus on leading and directing the promotion of our country’s industrialization and modernization, in conjunction with developing green economy and agriculture, protecting natural resources and the environment, and adapting to climate change. Create breakthroughs in the development of an infrastructure system that is strategic, synchronous and modern, while also maintaining a clear focus throughout this process, identifying the key points; allocate resources and harmoniously handle the relationship between key economic hubs and regions that still face many obstacles - regions where many ethnic minorities reside, mountainous, border regions or remote islands. Draw up plans to raise the quality of human resources in order to meet the needs of sustainable development, and the participation in the Fourth Industrial Revolution. Vigorously promote the development of education and training together with science and technology, innovation and renovation to boost the productivity, quality, efficiency and competitiveness of the economy; formulate and actualize the national digital transformation program, develop digital economy in order to create new driving forces for national development.

Step up the development of culture and society, harmoniously combine the realization of social equality and progress with economic development. Bring into play the cultural values and the strength of the Vietnamese people, together with the aspiration to develop a prosperous and happy country; bring into play the heroic national traditions and history; construct a culture that is imbued with national identity; considering these as important resources for the country’s development. Put people at the center of development - the people are to be the highest goal of development, and at the same time the most important driving force of development. Social equality, social progress, cultural values and environmental protection must never be “sacrificed” in pursuit of mere economic growth. Pay attention to improving social welfare and security, as well as substantial and sustainable poverty reduction. Bring into play the golden population advantage, and proactively respond to our country’s aging population trends.

Continue to consolidate and strengthen the national defense and security potential; resolutely and persistently struggle to firmly protect the Fatherland’s sacred independence, sovereignty, unity and territorial integrity; ensuring public order and social safety, especially human security. Concretize the foreign policy of independence, self-reliance, multi-lateralization and diversification; proactively, comprehensively, extensively and effectively carry out international integration; be a good international friend, a reliable partner and a responsible member in the international community. Persistently handle disputes related to territorial sovereignty and islands in a peaceful manner, with international law as the basis; maintain a peaceful and stable environment for the fast and sustainable development of our country in new conditions.

The Government and I vow to dedicate all of our efforts to serve the Fatherland and the People, carrying out functions, tasks, and rights as defined by the provisions of the Constitution and the law, acting as the executive organ of the National Assembly while always abiding by the leadership and direction of the Party Central Committee, the Politburo, the Secretariat and of comrade Party General Secretary Nguyen Phu Trong. To fulfill the honorable responsibilities entrusted to us by the Party, the State and the People, the Government of the 15th-tenure National Assembly believe and hope that we will always be assisted and actively supported by the entire political system, by the National Assembly, the State President, judicial organs, the Vietnamese Fatherland Front, socio-political organizations, former leaders of the Party and the State; press agencies; compatriots within our country and overseas.

Once again, I would like to extend my sincere thanks and send wishes of good health, happiness and many successes to the incumbent and former leaders of the Party, the State, the Vietnamese Fatherland Front; the National Assembly delegates along with compatriots and voters throughout our country.

Thank you very much./. 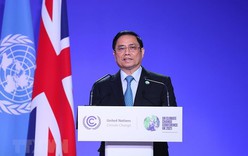 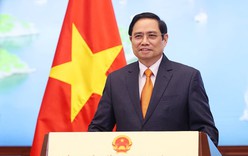